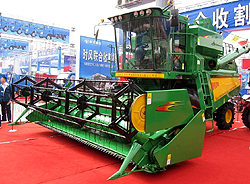 Farmers in China only took up widespread use of combines as recently as the late 70’s. More encouraging state policy and an ever-increasing trend toward farm mechanization lead to a rapid increase in production. Today, China leads the world in sheer volume of combine harvesters produced.

More than a million crop harvesting machines, including combines, were produced in China in 2011. Incredibly, that represented a staggering 50% year on year increase from 2010.

China’s Ministry of Industry and IT estimate that in excess of 150,000 combine harvesters per year will be needed for the domestic market between now and 2015. There are currently 84 domestic Chinese companies involved in the manufacture of combine harvesters.

Chinese authorities, however, have expressed concern over increasing levels of foreign competition in the lucrative domestic market. Where Chinese combine makers lag overseas competitors, is in the vital area of technological advances.

A recent report from China’s Ministry of Industry and IT concluded that domestic producers of combine harvesters were incorporating technologies some 20 to 30 years behind those of international competitors.

Furthermore, authorities point to a dramatic rise in patent applications filed by international companies. Over 70 patent applications for technological innovations relating to combine harvesters have been filed by Japanese corporations Kubota and Yanmar alone, whilst US giant Deere has filed a further 17.

China’s domestic combine harvester makers have done much to meet local demand, even expanding into overseas territories. But without a greatly increased spend on research and development, local manufacturers will continue to face ever-increasing competition from multinational corporations.