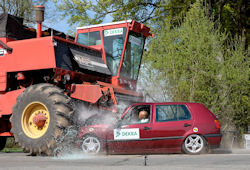 A review of local newspaper reports and the available government data from the last few years demonstrates clearly that combine harvester accidents fall into two main camps – injuries to combine operators and accidents that occur when bystanders and other road users or pedestrian are struck.

In general, it is estimated that around one in ten farm accidents are caused by machinery. Tragically, many of these accidents could have been prevented. Furthermore, farm owners have a legal duty under Health and Safety legislation to ensure their worker’s safety.

All too often accidents occur when combine harvester operators attempt to clear blockages and obstructions without ensuring that the engine and all moving parts are stopped. Many accidents have occurred when the header becomes stuck and the driver tries to free it. Alarm bells should be ringing every time the header needs unblocking as so many tragic accidents have occurred as a result of misguided attempts to unblock headers.

It’s far better to avoid blockages than to try and unblock them. With this in mind, the combine should only be operated within its safe limits and not overloaded. By monitoring the instruments and correctly setting the height of the header most blockages can be avoided. When they do occur using the cutters drive reverse mechanisms is the safest way to deal with blockages.

Accidents also occur as a result of contacting overhead power lines. Operators should know the height of the combine, including any aerials fitted and be aware of the possible risk of power line contacts both in the fields and on public roads.

There are a number of crucial safety points to remember which can help save lives and prevent critical injuries. Manufacturer’s instructions should always strictly be adhered to, without exception. Proper maintenance schedules must be observed by suitably qualified mechanics. Driver’s must have adequate up to date training by approved trainers for the type of combine they are operating. In addition, all safety guards should be checked regularly. Emergency stop buttons and automatic cut outs and sensors must be in correct working order.

When a combine harvester is not being used it should be safely stored in ‘safe stop’ mode with the handbrake on, controls in neutral and with the key removed. Before a harvester is started all other helpers, bystanders, farmworkers etc should be standing well clear. Tragic accidents have occurred when a blockage has been cleared only for a helper, standing too near, to become entrapped and killed by the moving parts of the header when the combine is restarted. Often such accidents involve loose items of clothing becoming entangled in belt drives or moving mechanical parts.

Extra special care should be taken during the harvest months when operators become tired and are working under increased pressure; this is the time to step up safety procedures and avoid complacency.

It is important to remember that not all accidents are caused by moving machinery. Perhaps the majority of injuries, though rarely fatal, are caused by slips, trips and falls from the combine’s cab. Driver’s should not attempt to clamber around the combine except by using the manufacturer’s designated ladders and standing platforms. Passengers should never be carried outside the cab and children should never be allowed to play on combines.

A smaller proportion of accidents occur when pedestrians are struck by combines. It should go without saying that it is extremely dangerous to enter a field in which a combine harvester is operating. Unfortunately, accidents have been reported where people have done exactly that. Whether attempting to get a dog back on its lead, or not following the bridleway or footpath, every year walkers are killed and injured in incidents with combine harvesters. Drivers should take extra care when reversing and visibility is restricted.

A study of 60 accidents involving combine harvesters by the UK’s Health and Safety Executive between 1996 and 2006 found that of the ten fatalities recorded, six were due to people being run over, the other four resulting from attempts to clear blockages.

Where accidents involving combines do occur, they are often at remote, inaccessible locations. In such an eventuality, the air ambulance can be the difference between a serious injury and a fatality. In addition, farm workers should have training in basic first aid and have access to a first aid kit and fire extinguisher. When working alone, it is also vital for operators to have some means of communication easily to hand, such as a two way radio or mobile phone.

When collisions occur as combine harvesters are travelling on public roads the resulting accidents can be very serious indeed. Modern combines routinely weigh in at over 30 tonnes. When a combine collides with a smaller vehicle the impact frequently results in serious injuries and fatalities. Motorists are advised to give plenty of clearance to combines, be aware of their extra width and slow relative speed, and never ever to attempt rash takeover manoeuvres when unsighted. Collisions typically occur when a slow moving combine is exiting a farm gate into a narrow country lane and is hit by a fast-approaching car or motorbike, with devastating effect.

By becoming more aware of the most frequent causes of accidents, combine harvester owners and operators can continue to improve working practices, and save lives.